As we all know and it’s nothing new, Apple and Samsung have waged war in the smartphone space for years and years now. The recent battle between the iPhone X and the Galaxy S9 was arguably the best showdown to date.

While the Samsung Galaxy S9 doesn’t look too different from the Galaxy S8 before it, it’s a touch thicker and heavier than its predecessor. Compared to the iPhone X, though, it remains lighter, long and thinner.

Both phones feature a premium all-glass design surrounded by a metal frame, and both are dominated by their respective bezel-less displays.

Irritating some people, of course, is the small ‘notch’ at the top of the iPhone X display, where you’ll find the front-facing camera and sensors. Samsung has mercifully avoided this design flourish.

The iPhone X was heavier than the Galaxy S8 at 179g compared to 155g, and that remains the case even though the S9 has put on some weight – it’s now 163g.

All-in-all, though, there isn’t much between the two in terms of dimensions – certainly, nothing deal-breaking if you’re considering parting with your hard-earned for the best smartphone money can buy.

The Galaxy S9 and S9+ will offer a choice between a 5.8in or 6.2in QHD+ Super AMOLED curved display with 570ppi or 529ppi, respectively. If it’s anything like the S8, Samsung’s screen will likely best the iPhone X, at least in terms of raw specs.

Although not curved like that rumoured to be on the S9, the iPhone X’s 5.8in OLED panel stretched to fill the front of the phone, albeit for its odd-looking ‘notch’. What’s more, the ‘Super Retina’ display on the iPhone X, at 2436×1125 and 458ppi, is the highest-resolution screen to feature on an iPhone yet, and the first to make use of OLED and Apple’s True Tone tech, which adjusts the white balance to suit your environment.

Built using Samsung’s second-generation 10nm process technology, the Exynos 9810 promises to be more energy-efficient, with Samsung claiming a doubling of single-core performance and a 40-percent improvement in multi-core scenarios. So expect much better battery life from the S9, and for it to soundly beat Apple in that respect.

Elsewhere, the iPhone X packs 3GB RAM, compared to the S9’s 4GB and the S9+’s 6GB. There’ll also be a choice of 64GB or 256GB of expensively built-in storage.

The Galaxy S9 ships with 64GB built-in storage, while the Galaxy S9+ packs 126GB. Both offer microSD expansion up to 400GB. 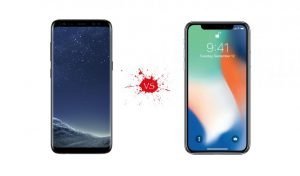 It’s always difficult pitting iOS against Android, because almost everyone knows which operating system they’d rather use.

The iPhone X, naturally, ships running iOS 11. This brings with it some features that will only be available on the pricey flagship, including Face ID, animated emoji (or ‘Animoji’), new gestures for navigating home and mult-tasking, and portrait lighting and selfie modes.

The Galaxy S9 runs Android 8.0 Oreo and, as usual, Samsung’s ‘Experience’ skin sits on top, which is getting better with every iteration of a flagship phone, and will equip the device with a handful of custom features (aka bloatware), including Galaxy Apps, Samsung’s own Gallery app and a tool for pairing your Samsung-branded wearable. The latest version of Samsung Experience brings AR emoji, Samsung own’s take on Apple’s Emoji, along with support for landscape orientation for the first time. 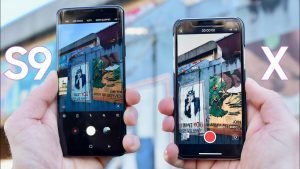 iPhone X vs Samsung Galaxy S9 and S9 Plus: Cameras

The iPhone X sports a dual camera setup similar to that which debuted on the iPhone 7 Plus. However, the two 12MP sensors have been upgraded, and can now shoot 4K video at up to 60fps and 1080p slo-mo video at 240fps.

he Galaxy S9 retains its single-lens 12MP Dual Pixel camera with OIS, while the Galaxy S9+ packs a dual 12MP set-up on its rear, comprising of wide angle and telephoto lenses.

The cameras on both the S9 and S9+, as expected, come with a dual aperture of f/1.5 and f/2.4. Samsung claims its flagship smartphones are the first to offer such a feature, and adds that it will deliver “the brightest lens of any smartphone camera on the market”. 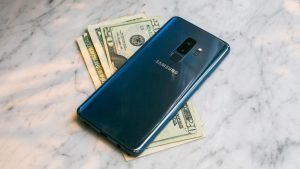 iPhone X vs Samsung Galaxy S9 and S9 Plus: Price

While pre-release rumours had suggested that the Galaxy S9 would be $100 more expensive than last year’s S8, Samsung has set the price just a bit lower – $1039 is still a fair amount of money, but about $50 less than expected. Pricing of the S9+, meanwhile, has come in more or less as expected at $1239.

That’s still quite a bit cheaper than the iPhone X, Apple’s most expensive-ever smartphone, with prices starting at $999 for the 64GB model. This eye-watering opening price-point, if reports are to be believed, has led to a sharp dip in iPhone X sales following the usual early rush for a new Apple product.

We don’t own the images.