Elon Musk – From Billionaire to Person at the Edge of Ruin

A polarizing figure, entrepreneur and billionaire who can cause a storm with one tweet. His behavior during the presentation of the results for the first quarter of 2018 is considered both as unhinged and brilliant, spurious and authentic, cagey and candid.

Little Musk: “Where is the whole world?”

His father, Erol Musk, electrical engineer, said in an interview with Fortune in 2015 entitled “How to Raise a Billionaire”, he said that Elon has always been such.

“When most people drink drinks at a party and talk about normal things such as sports, Elon would search for books. At the age of three or four she knew how to ask “Where is the whole world? After such questions, I realized that it was a little different.”

Elon Mask was born on 28 June 1971 in Pretoria, South Africa. His mother, Maye Musk, was a model and expert for children, and she also appeared on the cover of the magazine “Time”. After the divorce, Elon and his brother Kimball decided to stay with their father. At the age of 12, he created a computer game that he sold for $500, and the author of his biography, Ashley Vance, claims that Elon was a victim of school bullying, and was once so beaten that he ended up in a hospital.

After high school, his family moved to Canada. In 1992 he transferred from the University of Ontario to the University of Pennsylvania, where he received a degree in physics and three years later from economics. Elon wanted to enroll a doctor at Stanford, but he gave up only a few days because he discovered the great potential of the Internet. In 1995, with his brother Kimball, they launched Zip2, an online map software that companies paid to advertise.

He have mentality of samurai

“My mentality is like the one of the samurai, I would rather carry out harakiri than to fail,” Elon said this before selling the company “Compaq” for 340 million dollars.

Later, Elon founded the company “X.com”, which together with Peter Till and his project “Confinity” created “PayPal” – the popular online payment service. PayPal was sold in 2002 on eBay for $1.5 billion. 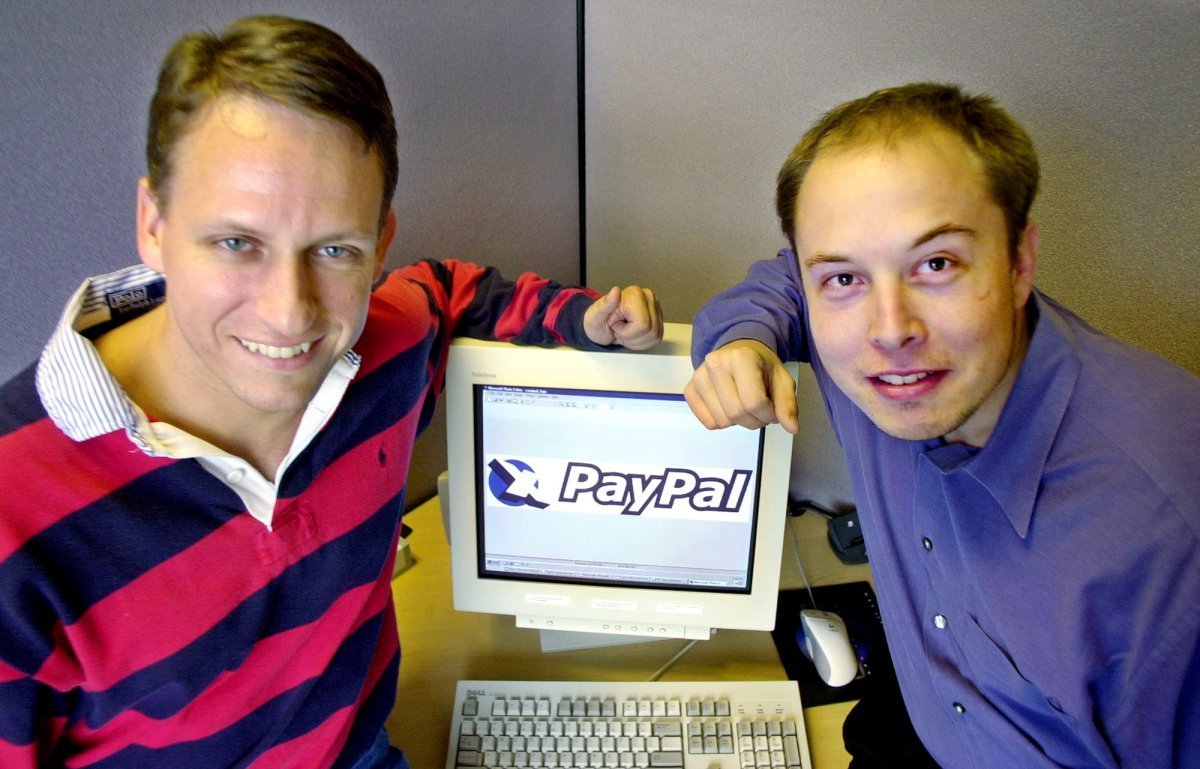 Elon Musk, Peter Till and PayPal.

Elon Musk had a crazy plan to send mice and herbs to the moon, and when he earned from selling “PayPal” as a great fan of science fiction, he tried to buy old Soviet rockets, but he did not have enough funding for it. That’s why he redirected the money to the establishment of “SpaceX”, which aims to colonize Mars.

“History can be played in two ways. One is to stay on Earth where, over time, we die as a species. The alternative is to become a civilization and a multi-planet kind that travels into space, which (I hope you agree) is the right path, “he said.

From the spacecraft, the billionaire also became interested in the small electric car manufacturing company, founded by Martin Eberhard. Musk joined Eberhard in 2004, and soon became chairman of the board and participated in the development of their first car – Tesla Roadster.

On the first initial public offer of shares, Tesla earned $226 million, followed by the production of the limousine Model S and SUV Model X. Serious problems in Tesla began to emerge due to the production of Model 3. For its production, the company borrowed one billion dollars, all of which resulted in a business fiasco.

In the third quarter of 2017, the company spotted a loss of $ 619 million, and due to difficulties in production, Tesla was late with the planned delivery. The waiting list has become longer, but the mere fact that there are half a million fans who pay in advance for their cars only proves the cult status of Musk and his company.

Stupid and boring questions are not cool

Fear among analysts and investors is caused by the fact that Tesla expends the money quickly and that there is no profitability.

World media report that this year it will probably take two to three billion dollars, and Musk reacted as a small child, declaring the media and their issues boring.

On the question of whether the company has enough capital, Elon replied with “Stupid and boring questions are not cool. You’re killing me.”

“Maybe he was tired. Maybe he was hungry. Or the stress finally cut down Elon Musk,” The Washington Post writes after the legendary conference call with investors during the presentation of the results of the first quarter.

The introverted thinker has no nerves – there are the journalists who can’t realize that the autonomous vehicles are more secure than the ordinary ones, and in the interpretation of Musk they actually kill people because they are afraid of automation, and on the other hand there are investment communities that fear bankruptcy.

On April 1st, Elon Musk published a tweet that Tesla bankrupted, a joke that apparently was just funny to him, and Bloomberg writes that he burns his money instead of gasoline.

Tesla Goes Bankrupt
Palo Alto, California, April 1, 2018 — Despite intense efforts to raise money, including a last-ditch mass sale of Easter Eggs, we are sad to report that Tesla has gone completely and totally bankrupt. So bankrupt, you can’t believe it.