The results are in. Joe Biden will be the 46th president of the United States of America. Four years ago, prior to President Donald Trump’s victory, the radical left decided to go out on the streets and protest declaring President Trump victory illegal and unfair.

Later these protests grew to full scale “revolution” filled with hatred from the tears of the radical left. They didn’t let President Trump’s legal rule to continue in harmony, as many of the voters supporting him wanted.

Besides building false cases against him and against each of his accomplishments, he always finished on the top, he was right all the time, and he was working in the interest of his people.

Following these false cases and narratives, their nominee, Joe Biden, and his future vice president Kamala Harris who made the carrier of putting people in prison came to victory in the 2020 US Presidential Election.

Since the beginning of the race, President Trump was the peoples champion, with his rallies full of supporters, while Biden’s rallies were full of…well fake news media representatives, defending his name and lying to the American people.

Following the tradition of doing fake things, they succeeded in rigging the US Presidential Election.

How they did it?

With the start of the election, President Trump had a huge lead in almost every red state, and every swing state, winning Texas and Florida in only the first night. Despite these two states being “non-white” as the left wants to say, they give their support to the man who helped them in the past 4 years by giving them jobs, jobs, and jobs, as he promised. He also won Ohio.

President Trump had a huge lead in Michigan, Georgia, Pennsylvania, Wisconsin, and North Carolina. The lead was steady and was really likely to win.

Obviously, we knew, that most of the votes, supporting Biden will come later, since they voted using the postal services and that the lead will narrow down to a smaller margin.

What we didn’t expect was having a batch of over 100,000 votes for Biden in Michigan and Wisconsin.

How they did it…They made a typo in a small county in Michigan. It was “accidental”, could you imagine. Like many other fake things, the lift did, in this case instead of giving Biden 15,371 votes, they gave him, 153,710.

The fake news didn’t wait long to project victory for Biden in the great state of Michigan, which lead to anger at Trump’s supporters and the whole Republican establishment.

President Trump himself tweeted about this. 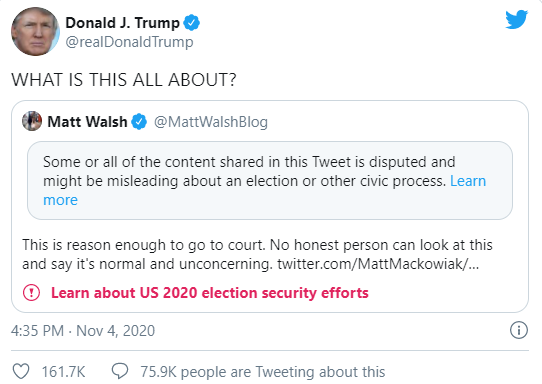 “All it was is there was an extra zero that got typed in,” said Abigail Bowen, the elections clerk in Shiawassee County in Michigan. “It was caught quickly,” she added. “That’s why we have these checks and balances.”

When Ms. Bowen and her team sent the county’s, unofficial vote counts to Michigan officials early Wednesday, they accidentally reported Mr. Biden’s tally as 153,710, when it should have been 15,371, she said. About 20 minutes later, she said a state elections official called her to ask if the number was a typo, Shiawassee County doesn’t even have that many residents. Ms. Bowen said she corrected the figure and the number was updated.

Updated or not, you cannot go public, without double-checking things, but when the fake news is on your site, we guess you can.

On Friday, there were 21,000 votes in Pennsylvania coming towards Joe Biden. Now, Pennsylvania is a huge state, so it is expected for Biden to get those, but, huge but…those votes came from dead people.

Strange? Why? This is the left ladies and gentleman, everything is possible.

A spokeswoman for the Pennsylvania attorney general’s office said: “The court found no deficiency in how Pennsylvania maintains its voter rolls. There is currently no proof provided that any deceased person has voted in the 2020 election.”

The lawsuit will likely be ruled out, knowing how things in now left America work.

Folks, they did it, they stole the happiness and security from the God-loving American patriots, by nasty games against president Trump.

America was the greatest country in the world, and in the past 4 years despite everything the left were doing we’ve shown that when President Trump is on our side, God is on our site as well.

What will happen to us, to our freedom, to our First and Second amendment? Time will show, but we as Americans need to show support to our new illegal president, we can fight, we can denounce him, but at the same time he will be our commander in chief, and we must support him.

We cannot forget who was president Trump, but the day Biden enters the white house, he will be the president. We will not rage, protest and destroy our cities, but will work and try to build the ground for the next Elections, and by the will of God, we will win again and will rise America to greatness again. God bless you and God bless America.