Tom Evans, 21, Alfie’s father has made a dramatic u-turn tonight as he praised Alder Hey staff hours after claiming doctors “hate” the family and treat them “like criminals.” Tonight called for protests outside Alder Hey Hospital to stop – as he signalled an end to the public campaign to have his sick son released.

Tom Evans said to his Alfie’s Army supporters should “return back to your everyday lives” following days of fevered demonstrations outside the Liverpool clinic and on social media. Also, he asked supporters to “allow myself, Kate and Alder Hey to form a relationship, build a bridge and walk across it.”

His ‘final’ statement, which praised staff for ‘dignity and professionalism,’ came after he reportedly spent this afternoon in talks with the hospital.

Tom Evans had earlier suggested Alfie could live for “months, possibly years,” and vowed to go back to court if today’s meeting “doesn’t go well”. 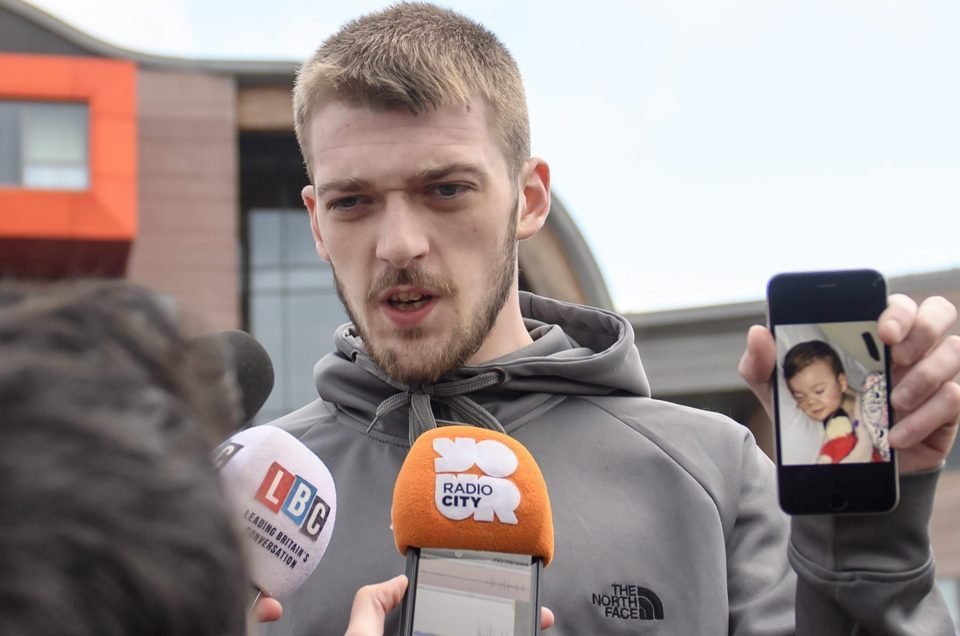 His comments also came just hours after it was revealed NHS staff in Liverpool have been told to hide their uniforms over fears of abuse.

Also, hours earlier Tom had blasted medics by claiming they treated his family like “criminals”.

He told LBC radio: “We’re not like them. We walk around the corridors and they pop into other cubicles to avoid us.”

Protesters across London, Belfast and Washington DC have marched in support of Alfie today after previous backing from Poland and Vatican and Italy.

Tom Evans and Kate James earlier revealed they would be dropping their legal battle to have Alfie taken to Rome for treatment – and instead simply want to take him home.

About hundreds of supporters of Alfie Evans staged demonstrations in London, Ireland and America today.

The protests come after Alfie’s parents Kate James and Tom Evans failed in a last-ditch attempt to persuade Alder Hey hospital and judges to let their seriously ill son on fly to Italy for treatment.

But now, the live stream of London’s march between Buckingham Palace and the Houses of Parliament was abandoned part way through after Alfie’s dad issued a statement calling on ‘Alfie’s Army to ‘stand down.’

“Our lives have been turned upside down by the intense focus on Alfie and his situation.

“Our little family along with Alder Hey has become the centre of attention for many people around the world and it has meant we have not been able to live our lives as we would like.

“We are very grateful and we appreciate all the support we have received from around the world, including from our Italian and Polish supporters, who have dedicated their time and support to our incredible fight.

“We would now ask you to return to your everyday lives and allow myself, Kate and Alder Hey to form a relationship, build a bridge and walk across it.

“We also wish to thank Alder Hey staff at every level for their dignity and professionalism during what must be an incredibly difficult time for them too.

“Together we recognise the strains recent events have put upon us all, and we now wish for privacy for everyone concerned.

“In Alfie’s interests we will work with his treating team on a plan that provides our boy with the dignity and comfort he needs.

“From this point onwards there will be no more statements issued, or interviews given.

“We hope you will respect this.”